About the Band – Then and Now

The Waterloo Concert Band continues a long tradition of amateur community and military bands in this historic area of Southwestern Ontario.

In 1858, the WCB began its official existence as the Waterloo Musical Society, making it nearly a decade older than Canada’s Confederation in 1867. As of 2018, there are only four bands in the entire province whose continuous history goes back further than ours!

Many gifted conductors have held our podium, including legendary musician-entrepreneur, C.F. “Professor” Thiele (1884-1954) who arrived in Waterloo in 1919. We are also privileged to have had some of Canada’s finest composers write commissioned works for us, such as the iconic Howard Cable (1920-2016).

Today we are a thriving non-profit musical organization with charitable status, whose membership averages 50 active players ranging from teens to older adults.

We take part in around two-dozen performances annually, including civic occasions (such as Remembrance Day), retirement community programs, summer Sundays in the park, two formal public concerts (December and Spring) and other special events – all of them presented free of charge to the community.

The WCB prides itself on high morale, an enthusiastic group work ethic, and a friendly environment. We welcome anyone with a desire to play regularly in a large ensemble and explore a wide variety of music. We do not charge membership fees or hold auditions. Our rules are minimal and common-sense, like taking care of sheet music and attending enough rehearsals to make our engagements the best they can be for both players and audiences.

From September through June, we rehearse most Monday evenings (except statutory holidays) from 8-10 pm. We use the upstairs Community Room at the Community Pavillion at the Waterloo Recreation Complex.
(The Pavillion is located behind the main building. Take the 2nd entrance off Father David Bauer Drive, under the overhead walkway, the new building is on the right.  Enter the main entrance that faces the parking lot…we’re located on the 2nd floor! Stairs and elevator available)

The Waterloo Concert band is always looking for new players, volunteer helpers and financial donations (tax-receipted) to supplement our ongoing community programs. If you are interested in being part of our musical family, please contact us. And for bookings and performance inquiries, please contact bookings@waterlooband.com

We look forward to meeting you! 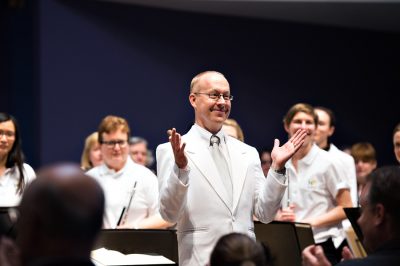 Trevor Wagler is co-owner/Director of Waterloo’s Renaissance School of the Arts (“Waterloo’s Finest Art Education Centre”), home of the critically acclaimed KW GLEE. In addition to leading the Waterloo Concert Band since 2006, he is a busy freelance French horn player (on modern and historical instruments), conductor, organist, composer, arranger/orchestrator, music editor/copyist and clinician.

Passionate about music education, Trevor maintains an active teaching schedule at Renaissance School of the Arts and holds part-time faculty positions at both Wilfrid Laurier and Conrad Grebel University College (University of Waterloo). His latest venture is the Kitchener-Waterloo Youth Concert Band (KWYCB), formed in 2017 to grow our next generation of community musicians.

As an experienced composer/arranger/orchestrator, Trevor has created more than 1,000 scores for orchestras, bands, chamber ensembles and soloists around the world. Recent commissions include orchestrating and conducting “The K-W Symphony Presents KW Glee Live!” (2015, 2017, and again in January 2019) at Kitchener’s Centre in the Square, as well as new music for the K-W Symphony, Symphony Nova Scotia, National Arts Centre Orchestra, Toronto Symphony, Vancouver Symphony, Edmonton Symphony and Kingston Symphony.

In 2016 he was instrumental in bringing one of the late Howard Cable’s last completed compositions – a tribute to legendary Waterloo conductor C.F. Thiele – to a successful and historic world premiere with the Waterloo Concert Band.

Trevor is a member of the Society of Composers, Authors and Music Publishers of Canada (SOCAN), the American Federation of Musicians of the United States and Canada, the International Horn Society, the Historic Brass Society and the National Geographic Society.

He resides in Waterloo, Ontario with his soulmate, flutist Wendy Wagler, and their three fabulous children.